A technological civilization is by greedy definition in energy. The inherent technological risk that it generates increases with its needs. Each one of us has in memory the world disasters of Chernobyl and Fukushima.

The exploitation of energy sources increasingly more powerful will escape our control.
These energies will be able to evaporate an ocean: the greenhouse effect which will follow will raise the temperature on the level of the ground of several hundreds of degrees, involving an extinction of mass.

The revelation locates the accident under the sea: the terrestrial coat will be probably reached in-depth. If the core were reached, the Earth would lose the protection of its magnetic shield. The disappearance of its atmosphere eroded by the solar wind would reduce finally our Earth to a condition close to that of the planet Mars. 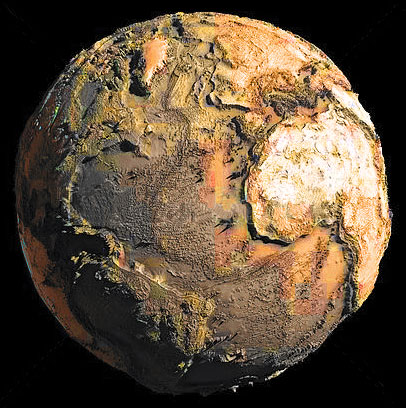 Planet Earth
The last extinction caused by the man?

Extremely fortunately, the Creator consider a safeguard measure:
XII9 (Only) My Breath puts out the fire.
10 You have My Breath.
(When) your knee bends (with tiredness), My Hand helps (you) up.

It is remarkable and surprising to note that the Father uses a spiritual and nontechnological concept to avoid such a cataclysm. The spiritual development of an intelligent species must thus relay the technological stage to be capable to prevent or to limit this kind of cataclysmic unfolding.
Spiritual progress of the time which comes thus depends survival on our species.

and develops in these terms:
XXII14My Hand covers the brother (that) goes (along) conscienced;
(he) pushes the sun, the lights (of heavens and of the mind alike just as) the arm(ful) of thorns pushes the donkey (forward).

The evolution planned for the man seems to have to equip it of still inconceivable capacities.
Humanity enters this new spiritual phase that the Father names “the conscienced brother” who will allow the control of the forces ready to move stars.
The possibilities which open are infinite: they could allow-by example-of reconfiguring and stabilizing an unoccupied nearby solar system, to position there planets optimized for the conditions of development of our species in the livable zone of its star and to enjoy new home planets.

Wouldn't this alternative be infinitely preferable with that to exclusively be based on a technology which proposes a life of rat to us on a not very hospital space pebble?

The warning is explicit: because a political system cannot generate necessary spiritual progress, it results from it that any people which do not become emancipated with his doctrines to take the path of the rise traced by the Word forward to the extinction.

The history does not miss episodes where the man did not know to consider in time the Signs which were addressed to him:
SOURATE LI
31- Abraham said: “Sent, which is your mission?”
32- They said: “We are sent against sinning people
33- to launch bricks to them
34- marked at your Lord for the unbridled ones.
35- Yes we made the believers of this city go out
36- where we had found only one house of believers
37- and we left there, for those who are afraid of the dreadful torment, a Sign
38- as in Moses when we sent him to Pharaoh with an obvious power.
39- But Pharaoh, sure of his power, turned away by saying: " it is a wizard or a demonic ".
40- We seized Pharaoh and his armies and threw them with condemnation in the abyss.
41- In the same way to Ad, when we sent against them the devastating wind
42- which leaves, where it blows, nothing that it reduced to dust.
43- In the same way to Thamoud when it was told them: « profit still a little! »
44- and that having transgressed the Order of their Lord, the Shout seized them. They had the open eyes
45- but could not stand any more nor save itself.
46- In the same way still at the people of Noé, because they were perverse.

These operating systems, which do not have any justification in comparison with the human evolution, lean on idols of the spirit and are maintained with difficulty by propaganda.

Indefatigably, the Creator continues to encourage us:
III1  Lay your hand under My Hand!
287 My Word is the Law That is to be.
V6  Man wins now.

The Creator will assist our efforts, but He will not make in our place what would take away our responsibilities and would infantilize us.


How to apprehend well this new evolutionary stage of the “conscienced brother”?