We are spirits. We require having a body to interact significantly in a given space.
The process of the birth allots a biological body to us to act in the space-time. This life time must imperatively be made profitable to build a second body  – the soul – in the fifth dimension, cradle of the future life. The revelation of the Creator is given to us to this end.

The achievement of the Word is connected with a process of intrication between the biological visible matter body made up and the soul made of invisible matter.

A successful intrication allows to generate an autonomous soul capable of sustain and directing itself, to perception and communication in its own dimension, especially with the creative Father.
Intrication is a dynamic phenomenon: it can be continuous, suspended, cancelled or reset at any moment with its respective consequences on the generation of the body soul.
This process presents an individual aspect as well as a collective one.

We will see finally that this process is reversible in the state adamic, namely that the completely formed soul is in capacity to regenerate in its turn the biological body: it is the eternal life.

Our environment
The classical representation of our universe admits usually four dimensions which we call space-time. However, the message of the Creator leads us to add a fifth dimension to become understandable.

41 12 He established seven skies in two days and revealed with each Sky its order. And the Sky nearest We decorated it with lighting which keeps it. 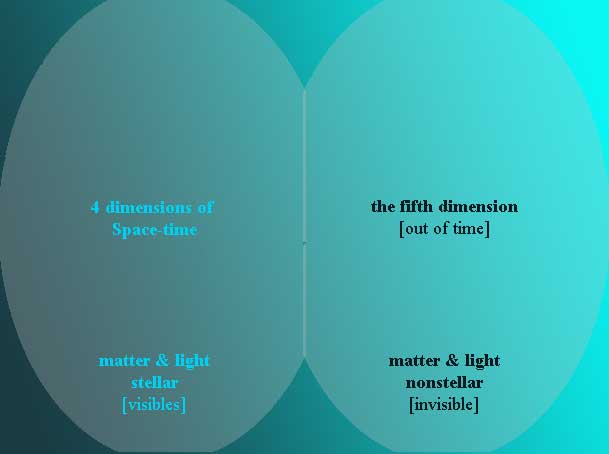 Exploded representation of a universe with five dimensions

The Space-time completely seems to correspond to the first Sky, the other skies being gathered under designation the “fifth dimension” in the state of the revelation.

210 …My Place not bounded by any stars, which has no east or west, Which is so white that beside It the suns look paler that moon.


Stage of the man

It is revealed to us in the Koran in particular that we are initially incarnated spirits,


the biological body being used to us of support or vehicle of experimentation in the space-time. 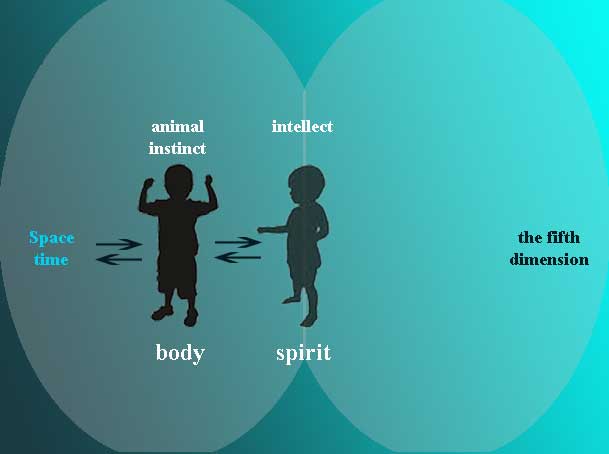 Exploded representation of the state Man

At this stage of development, the man differs relatively little from the primate from which he was drawn


Endowed with language and creativity, his instincts and social structures reflect his primitive sources.
His longevity remains limited to a few tens of years; he does not have any means at this stage of exploring the fifth dimension which will become his habitat at the time of death –or dissociation of the spirit and the physical body–.

If he dies in this state, the man does not have any degree of freedom in his last home and remains sadly confined in the low dark and frozen zones, in waiting of the Day.

47 Without a soul the specter wanders tormented, blind, famished, through the dark galleries dug by worms and through freezing hell which changes it into hoarfrost; the specter, then, frighten humans.


Stage of the Brother

The Creator supervises the development of the human creature.

XXIII17… We are not without looking at creation.


Spread over the universe, He manifests himself in space-time in particular by the creations of nature, his Word transmitted from century to century by the prophets, rare theophanies as well as Signs addressed punctually. 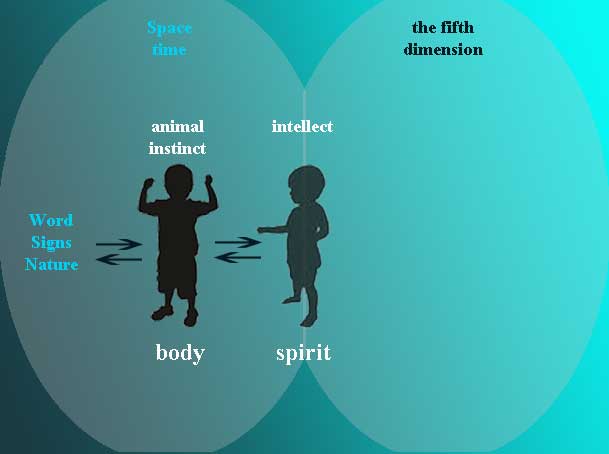 Manifestations of the Creator in the Space-time

The man who becomes aware of his Presence, listens to his Word to put it into practice generates a body called soul, corresponding to the biological body in the fifth dimension: it is a specificity of the Word of the Creator. 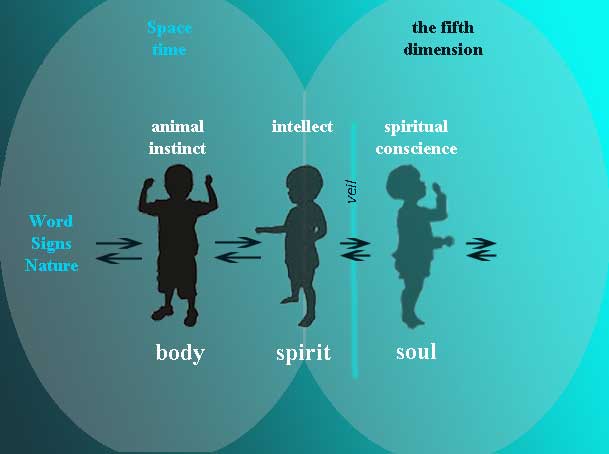 Exploded representation of the state of the Brother

Initially unconscious in its first phases of development – represented here by a veil –, this body becomes gradually the seat of the spiritual conscience. The man learns how to control his appetites and its instincts of domination, develops capacities of compassion; its social structures move away from the primitive hierarchical tribal model to adopt organizations compatible with the direction of fraternity and justice.

At the time of biological death, he disposes nevertheless of the soul which he generated in this new home. The believer faithful to the Word that he received and which achieves of good deeds can thus hope to profit from the arrangements prepared by the Creator in waiting of the Day: gardens of the paradise.

XVI30 Those whose work in this life is good, their life will be good, but the stay in the other will be better. What a beautiful stay for the faithful ones!
31 They will enter the Gardens of Eden where the brooks circulate and they will have what they will want. It is the wages which God pays with the faithful ones

XXII 15 (When facing) death (and) hunger man’s tongue hangs down, his chin trembles;
16 (but if like) the veprell he holds (to) My Lip, (he becomes) the brother, (he) drinks the Fat Water – It Which does not dry up ?, (the brother) flies high (over) the grave.


Stage of the Brother Conscit

If he is constant in his will of achievement of the Word of alive sound, on the model suggested,


The Creator will choose the opportune moment to bring him to the consciousness of the fifth dimension by raising the veil gradually. Man then develops a new mode of direct communication with the Creator who manifests himself in this dimension by his divine Me that we will represent in this way.
42 51 It was given to no mortal that God speaks to him except by revelation or behind a veil or by a messenger which reveal what god wants and allows… 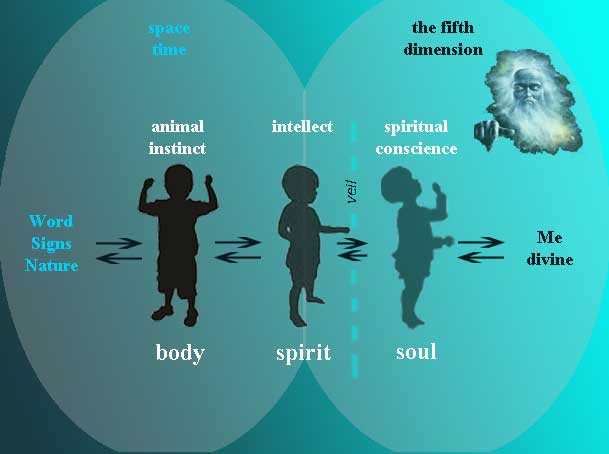 Exploded representation of the state of Brother Conscit

Yes, God can appear as well in an impersonal form as in a personal form.
Some readers familiar of the Bible will make the analogy with the architecture of the temple of Jerusalem.

Profiting from the enlightened advices of the Father, he develops an increased conscience of reality. His new capacities enable him to explore this new field which is not affected by the time, where matter and light which are not stellar origins present specific properties.
He becomes also gradually ready to communicate with the other inhabitants of this dimension. The exchanges through the veil limited to the beginning improve gradually, evolving to new fashions of communication.

XVI17 (When) sitting the brother sees the flower wilt(ing) and the rust (coming out), (he feels) his bone bend(ing);
(then into) his head the hoe comes (to till) the garden (that) never fades.
18 The brother (that) is clearsighted goes out (of) his (own) head, goes up into My Hand.
His head (becomes) gold on fire (like) the sun, his saliva pours the rain, the forest spreads over his leg.


he achieves works correlated with the Action of the Creator.


His print in the Space-time becomes considerable,

XXII14 My Hand covers the brother (that) goes (along) conscienced;
(he) pushes the sun, the lights (of heavens and of the mind alike just as) the arm(ful) of thorns pushes the donkey (forward).


his longevity increases until reaching its plenitude.

XXIV9 The brother puts the star in My Hand; (then) he can hear the rock, he runs (al)on(g) his (own) arm (for) a thousand years.


Conscious of his collective responsibility, he establishes the Word as Law, the only one capable of generating Life.


At this stage of development, there remains still subjected to death although enjoying idyllic conditions in the future life, in waiting of the Day.

204 The Water That the soul like a sail glides along on does not come from the sky above you.
It comes from Heaven That is My Dwelling. The sea That is found on the Heights where you are to lead My People,
Those who will choose to follow you along the goat paths, has a nature unknown to man.