The Creative Father differentiated the man among the other terrestrial creatures while assigning him the capacity to do the spiritual ascent: this notion remains us again extensively unrecognized however. Not only we are generally unconscious of our own spiritual situation, but we often confound this notion with other aspects of our social life: culture, science – even our medical techniques – don't operate no of the transformations that the ascent exercises on our being. Step not exclusively intellectual, it is a real evolution of the whole being that implies body-mind-soul of the individual and that transforms it deeply to the point to make a new creature of it.

It is logical to think that we should – in the long term – reach a form of intelligence of the rise and the conscience which is associated for him. Our humanity is not at this point of development. Nevertheless, the intervention of the Creator in this century – Revelation of Ares – makes it possible to provide some additional foundations ready to form the first steps of this individual and collective intelligence.

Towards the spiritual intelligence

The scientific research admits on this day the history of a humanity that evolved slowly in space-time:

Representation of space-time brought back to an oriented axis

Evolution life primate or pre adamic confined in the space-time

The Creator's teaching brushes a more extended universe, an universe with a supplementary dimension where we have place. Whereas our biologic body gives us the possibility to evolve in space-time, our soul allows us to explore this other dimension of our universe; the integration of the experimentations to the daily of these two bodies restores us the human's real measure. 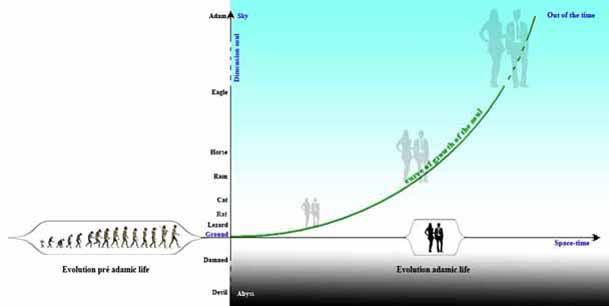 Universe represented since the dimension soul

Why dimension soul is important for the human one?
The man is not an animal; when biological death occurs, this dimension is that where his spirit is confined; his condition depends then largely on the level of development of his soul which becomes his new body. Deprived of soul, he falls in the abyss.

Moreover, to reach the level of adamic growth makes it possible human to regenerate his biological component perpetually, to overcome death.

Consequently, we understand the importance best that there is to know to position and to evolve in this dimension by facing the difficulties and by avoiding the traps which could to it be presented: it is one of the assets of God's teaching.

The spiritual intelligence would then make it possible to distinguish and adopt the choices suitable for induce Height, to distinguish and draw aside those which are cause of fall, and to evaluate the report-benefit-risk of new or complex situations.

By specifying the upward scale in which we evolve, by giving us reference marks, by explaining us our errors, where we stopped and why, by giving us the means of continuing our progression, the Creator gives us consequently in this new stage of the Revelation, the possibility of taking part consciously in our own evolution.

Previously, we briefly saw some evolutionary stages generated by the prophetic spiritual current which generated religious systems – white king – while weakening.
But the religion is not alone to structure our societies. Can one evaluate the evolutionary impact of a political system – black king – for example? It is what we will try to make in the lines which follow.

The black king doesn't have any attraction for the ascent.
Its appetite of power locates primarily its action at the level Ground, but its desire of power is such as it unceasingly pushes it to widen its field of influence.

Facing a believing humanity that rises under the prophetic action, its strategy consists in recovering the Father's Word to adapt It to its projects under pretext of improvement and modernity. It is to forget that man's speech doesn't have the upward power of the Creator's Word: its law inspired of the Word given puts a ceiling to its project with a morals of Rat.

To sit his authority under cover of justice, the black king also establishes a catalog of arbitrary sorrows: the judicial system; its slogan: nobody is above its laws; a system of accountancy more intended to ensure its institutions that – absolute priority – the concern of the behavioral change which gives the man on the way Heights.


It raises and place to managerial functions its zealous servants, ignoring or disparaging those beyond its influence when they represent a threat of change for the public order that it establishes, valorize the behaviors of those that let themselves drive submissively to the tomb, comfort them while promising them a death assisted and soft or if not some posthumous honor.

In addition, to integrate the individuals who were mislaid in the dark zones forms also part of his project. Thus it misleads its followers by standardizing destroying behaviors of soul insofar as those do not call into question its organization.

The diagram shows the field its exercise below: 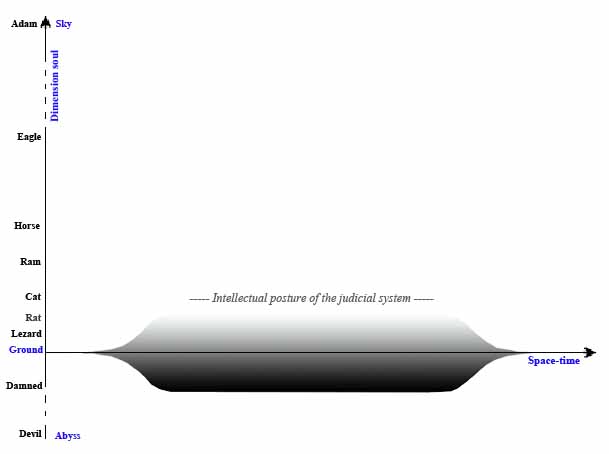 Field of exercises of the black king

Its strategy does not stop there: to see those which rose beyond its influence to fall down under its power belongs to its aspirations. For that, it erects scaffolding of alliances with the white king.
Lastly, manager of the public goods, it exhausts the efforts of the people in an unrestrained race with the exploitation of the resources of the space-time while neglecting to invest in the immense evolutionary potential of dimension soul.

The report-benefit-risk of a political system is definitely unfavorable.
The increased politization of our societies proves to be a recessive indicator everywhere – in spite of the efforts which it deploys to appear essential – Where reign the black king, the man dies! Worse still, he dies misled while living in a legality which by no means protects it to fall in the abyss… 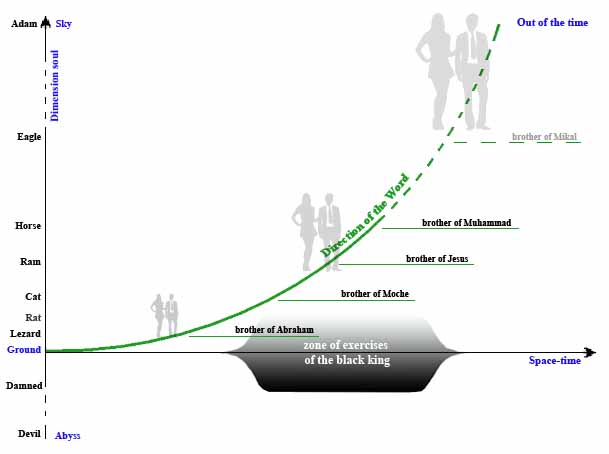 Synthesis of the performances white king and black king

Assistance with the Rise

We observe that the purpose of the attempts repeated of the Creator through the centuries are to generate a spiritual current which will make it possible to bring back humanity to adamic height.
This graph can make it possible each one to try to be located on this scale, but especially to find a way which brings back it in the Direction if it were diverted some and to take again the ascent. Although the development of the soul is unconscious in its first stages, the Creator can give more precise indications individually as the believer improves his capacity of communication with Him: if the rock gangue cooled during the centuries appears too difficult to fracture to clear you a way, you will be able to ask Him for the necessary help that will return you like lava in fusion.

A humanity in spiritual good health organizes itself so that each one of its members has the Right and the necessary means to do the ascension and to recover life. However we have just shown that our societies are structured like a trap that maintains the man in death.

A new civilization is to be built! Here is the measurement of the change which the Life claims. A great adventure awaits the pioneers who will leave to the assault of the Heights to discover still unsuspected richnesses there: the soul – true body – can, following the example the biological body, to contribute to the creation of new ranges tools, …

The new way of research – concerned of human progress – will be able to evaluate the upward potential of any organization. How to emancipate itself of the political trap? How to make work fraternally and intelligently individuals of all levels to form a chain of solidarity towards the Heights and to avoid the phenomenon of stratification generated by the religious systems? How to transform a material organization to avoid that it clings to the level Ground as an anchor and to make of it a genuine tool of accompaniment of the rise? …

Here are the questions put to all those which want to leave the degenerative spiral in which we let us be to launch out in the new civilization which starts now.