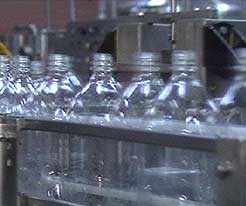 The ripe fruit of the Word of God is not the religion such as one knows it.

The development of the soul, true interface of communication and exchanges with the Creator of the worlds leads to the self-knowledge, with the conscience of what is (true), with the intelligence of life which makes it possible to collaborate with the Creative Father to look after humanity to be able to repair our space time where we mortally trapped ourselves.

It is by this means that we recently received a medical alarm concerning the toxicity of terephthalate polyethyene  (PET) used in the manufacture of food plastic containers. It would even seem that significant chemical exchanges could intervene simply while drinking with the neck of drink bottles in PET. (how to identify a plastic ? )

After we considered the subject, and having noted that the suspicion of toxicity was already raised by recent studies, it appears that the Creator does not wish as well here to give a medical alarm, by confirming the toxicity of the PET, as to consider the responsibilities which resulted in placing at the disposal of the public, products whose harmlessness was not sufficiently established.