THE HOT HEART, THE COOL HEAD


Adam belongs to the creatures called with the high positions in the universe.
XV 26 We created the man of clay, extracted from a malleable mud.
27 As for the djinns, we had created them before, starting from a fire of the burning furnace.
28 When your Lord called to the angels: “I will create a mortal of clay extracted from a malleable mud.
29 After I will harmoniously have formed it, and that I will have insufflated in him my Spirit: fall prostrate in front of him. ”
XVII 70… We certainly honored Adam's sons. We placed them well above a lot of those that We have create.
XXI 6 (Everywhere from) My (left) Hand to My (right) Hand (only) man blows (on) the fire. 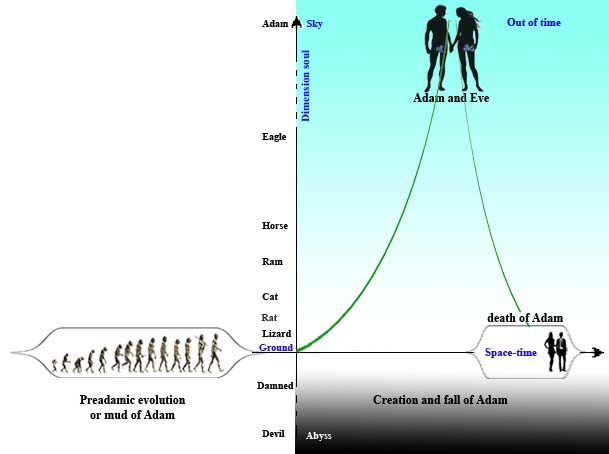 Creation and fall of Adam

The fall of Adam suspended the realization of its work, but the Creator - rather than to allot this role to another species–
XX 115 We had formerly entrusted a mission to Adam, but he forgot it,…
XLIII 60 If we had wanted it, we would have made of a part among you angels, and they would replace you on the earth.
XVI 10 The nettle is a king (if) My Tear wets the flower.


To assume this place again, the man - the death of Adam - must prepare there by carrying out the rise.
XXIII 3 The rock is not the son of fire; the lava (is).

The return on the Heights

On a Earth where the interactions increasingly more complex are felt on a worldwide scale, the need for a planetary management is made feel in a more pressing way.
The great social structures that we know, the mental concepts that we developed, establish on compartmental interests, became insufficient to satisfy our evolutionary needs: we need from now on more elaborate concepts and tools for civilization which integrate best the spiritual progress of humanity.
The Creator comes to initiate us with this management in the last stage of his Message by opening the way with concepts with five dimensions. New tools appear that we will try to implement to promote a civilization compatible with the evolutionary project allotted to our species.

Recall on the current configuration of our civilization (to see previously) 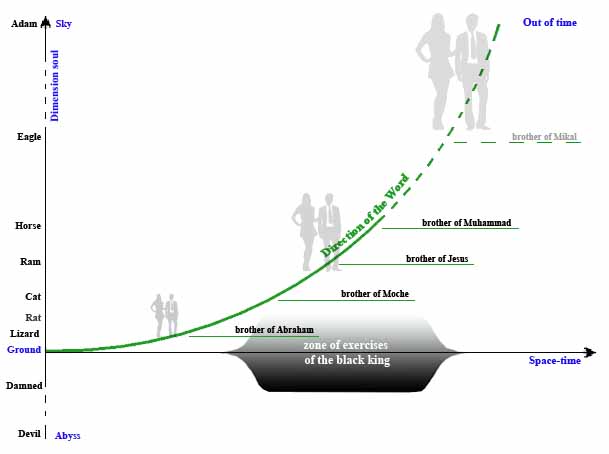 Synthesis of our civilization

Let us note that the Creator does not use a numerical system to structure this dimension:
33 6…Because My Wisdom is void of science, to man It seems to be immoderation, My Wisdom Wich you are unable to understand.

Recall on the black king 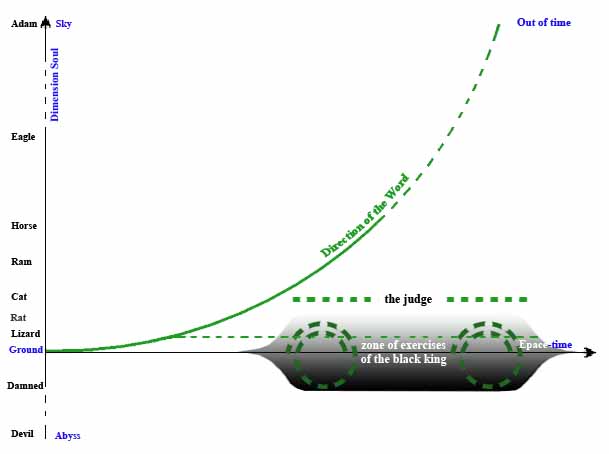 We gave a progress report on the impact of the policy (black king) - operating systems of the material and human resources - and shown that such systems - locked by a masked legal system of justice - remain on the spiritual infantilism which they maintain.
They do not satisfy the evolutionary needs for our species:
XI 3 (From) the judge the count flows.
4 The count hollows man out, man (turns into) a dwarf. The count hollows out the dead man. The noise pulls fat out of man.
5 Man (becomes) the ox in the field.
II 14 Man counts, man counts; the dream hides the night.

Foot-note: In connection with secularity
Conscious of the demarcation which furrows its field with Height of Lizard - and anxious to appear universal -, the black king creates concepts aiming at maintaining the unit of his herd; however, it hardly any more makes illusion.
XXVII 5 The black man(’s) arm is drooping.
XLIII 13 The black king – his arm (becomes like) the tongue of the hanged man.


What is it in connection with the religious systems?

The religion which invites to the achievement of the Word marks truly a progress in the human history, but the Father warns to us when it becomes a system of domination, become deaf with the calls of the Sky.
3 4 I have not given myself a mask, I have not set up a rank of princes in front of Me to conceal My Face, whether their sees are in the east or in the west, the crowned princes of religion and their subservient doctors, who artfully ponder over My Word in order to draw from It laws which secure their thrones and pulpits in Jerusalem, in Rome, in Athens, (and) beyond the seas,
5 wherever the princes have established their conquests, where they convene their vassals, wherever their rebels have spread giving up their crowns and thrones but retaining their doctors to derive from My Word other laws as worthless as the prince’s laws ; 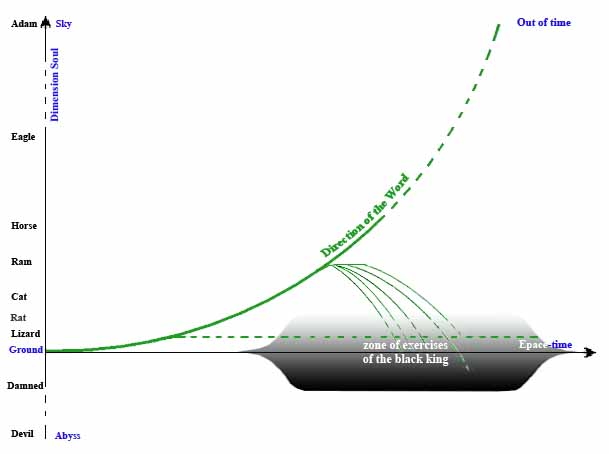 The white king, his son, his body runs in black water
The right way, points out God, is:

35 6 Uttering My Word in order to achieve It, this is true piety.

32 8 You man Michel shall teach that the pious man stands in front of My Word and does not take one more step forward to avoid falling into the abyss.

Inventory of the Heights Cat and Ram

Thus the brothers of Moses were mislaid in extrapolations far from the Word,
XVIII4 The black one talks to Mosheh, « The Word of Name goes (at) the pace of the rat, (whereas) my word (is wide as) the foot of the camel. »
5 (The brothers of ) Mosheh hear the black one!

thus the brothers of Jesus were mislaid through false hierarchies
3 1 … For I have not set up any princedom over My Assemblies.
2 The world has set it up, just as an invader establishes himself over the legacy of the nations conquered by his violence, who shuts their ears, eyes and mouth, so that they may no longer hear Me, so that they may no longer see Me and no longer talk to Me,
3 so that they may consider him as my manager, the invader skilful at putting his own words in My Mouth, at forcing nations to live as I do not want them to.

and through false lesson,
3 7 They proclaim My Word to My People, but they do not leave It up to them. Hardly has their left hand given It when their right hand restrains the reader’s zeal for Me, just as a wizard warns the fool against thoughtlessly drinking his philters; for they excel in making a secret, a dark place, which they alone know, from What I have delivered to the world in the Light.
8 No sooner has one of them proclaimed It than another teaches the people what they must understand, but not what they have heard, for they excel in making a weird whisper, a strange language, from Whatever I have delivered to the world to the strains of the Heavenly Horns, to the harmonious accents of My Messengers.

not recognizing single God more.
23 8 My People can no longer discern where I am, where I am not. 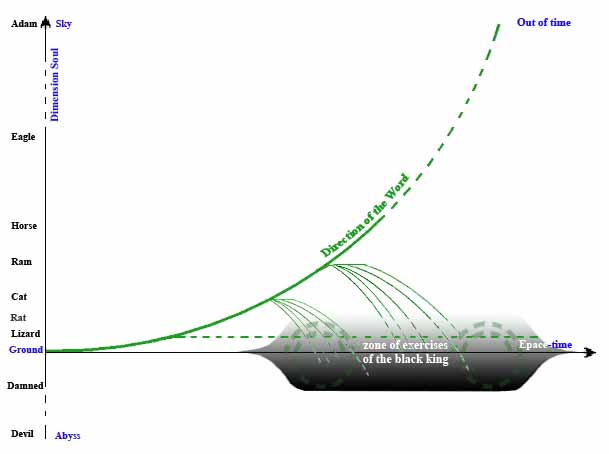 Brothers of Moses and Jesus

Today, which light does it remain with these religious systems?
The Father reveals us sadly:
I 7 « Mosheh – his brothers; Yuhshoo – his brothers, the(ir) arms (weight heavy) on the(ir) brothers,
8 (so) the night lies on the brothers. »


For example, shouldn't we see particularly the churches of Christian obedience leaping of joy in front of the return of Christ come to speak to them? Not, they make the deaf person ear, preferring to keep their chiefs and their superstitions forged during the centuries, being afraid to lose of their power, rather than to be with the listening of the Sky and to make the corrections which are necessary: proof that the religion-system does not achieve its mission.

Inventory of the Height Horse

Islam seems less reached by this phenomenon: on the one hand, it represents the religious current most recent, on the other hand it knew to preserve and remain close to the essence of the Message which was addressed to him
16 (In) the Book (you) close the centuries! Close, except Muhammad! His brothers are upright changers; (they) give a fair deal (in exchange) for faithfulness. 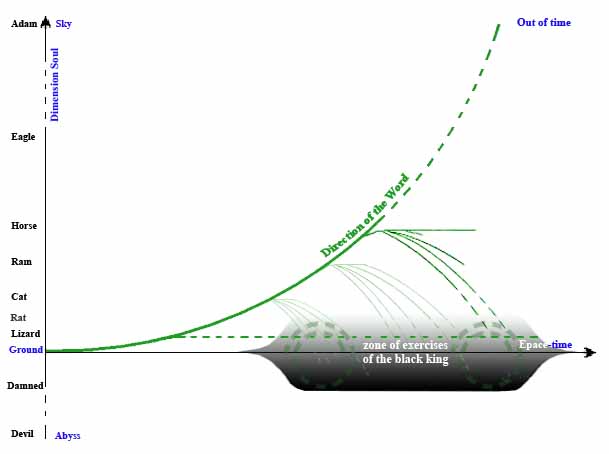 Brothers of Muhammad
The resolution of spiritual difficulties never comes from in bottom, but more advanced older brothers on the way or from God himself if necessary.

There is a warning!

Any human structure which is solidified around its hierarchy and of its beliefs in the point to become deaf with the Calls of the Sky tends to replace the Creator; become unable to make the corrective measures of evolutionary trajectory necessary to reach the Heights, it starts its fall towards the ground.

2 19 because, when My Breath vanishes just as the wind abates and drops into the sea the seed it was carrying (and) the rain it was driving along, the desert remains a desert, and the remnant of life in it is going to die.